Starting with “The Rescue of Data at Risk : An RDA/CODATA Workshop" held in Boulder, CO on September 8-9, 2016, Betsy Sheffield and Heidi McCann attended and presented the ELOKA poster, “Uggianaqtuq: Weathering Challenges in Sustaining Local and Indigenous Knowledge in a Digital World,” which summarizes the need to not only rescue data for viewing purposes, but also for the possibility of reuse on other information and communication technology platforms. Heidi McCann also presented an oral presentation titled “Stewardship of Documented Indigenous Knowledge (IK): Ethical and Legal Aspects,” which summarizes the contemporary views of how IK can be preserved, shared, archived and represented for community use and use beyond the communities.  The presentation also included the ethical and legal aspects already in place in protecting IK, the future protections that need to be considered when stewarding IK, all in collaboration and partnership with the communities.

During IDW in Denver, CO, ELOKA team members participated in various ways in a variety of sessions at SciDataCon.  Peter Pulsifer and Colleen Strawhacker chaired the - Linking Local and Indigenous Communities with Researchers for Improving Access and Discovery of Ethically Open Data and Knowledge - session, in addition to, presenting their papers on “Indigenous observations and knowledge of the Arctic: towards self-determination and information sovereignty” and “Introduction and Overview to Data Curation in the Arctic Social Sciences.”

Colleen also chaired the – Challenges and Opportunities Moving Forward for The Management and Curation of Physical Objects in the Digital Era – session in which she presented her paper on “An Introduction to Managing Physical Samples in the Digital Era: Next Steps for the CODATA Task Group” and Heidi McCann presented her paper on “Best Practices in Managing Indigenous Knowledge.”

On Wednesday the International Data Forum (IDF) convened with plenty of panel discussions on a variety of topics such as responsible open data, data stories, data for the public good.  The center piece of IDW, IDF brought together international researchers, industrialists, policy makers and educators to discuss the major opportunities and challenges of the data revolution, from ‘Big Data’ to ‘Open Data.’  One of the afternoon panels – Responsible Openness  - provided an active discussion focusing on how responsible consideration of privacy & confidentiality, safety & security, intellectual property, and legal constraints can promote open data sharing.  Christopher Horsethief  (Ktunaxa Nation Council) presented an Indigenous perspective on data openness – Trust, Openness & Limits in First Nations Communities.  His presentation showed an international audience how the Ktunaxa Nation has taken control of how research is being lead in their community and being looked at through a Ktunaxa lens, guidance and principle of reciprocity.  In other words a Ktunaxa philosopical schema on conducting research in their community.

Thursday through Saturday the Research Data Alliance (RDA) held their 8th Plenary Meeting, which brought together data scientists, researchers, industry leaders, entrepreneurs, policy makers and data stewards to explore how best to exploit the data revolution to improve our knowledge and benefit society through data-driven research and innovation.  ELOKA was fortunate to sponsor one of the many sessions - Indigenous Data and Information Sovereignty: Making Open Data work for Indigenous peoples.  The session was moderated by Dr. Stephanie Carroll Rainie,Assistant Professor, Native Nations Institute and the Mel and Enid Zuckerman College of Public Health at the University of Arizona.  This session provided a forum and space for advancing discussion about, and action on, Indigenous data and information within the open data movement, facilitate dialogue on the context of open data for Indigenous peoples and communities around the world, and support the exchange of ideas regarding ethical considerations and responsibilities when considering open data for Indigenous peoples and communities worldwide. 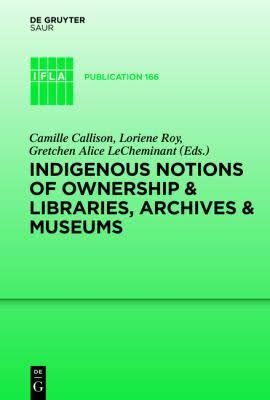 Sharing and Preserving Indigenous Knowledge of the Arctic Using Information and Communications Technology: Challenges, Opportunities and the Way Forward
Tangible and intangible forms of indigenous knowledges and cultural expressions are often found in libraries, archives or museums. Often the "legal" copyright is not held by the indigenous people’s group from which the knowledge or cultural expression originates. Indigenous peoples regard unauthorized use of their cultural expressions as theft and believe that the true expression of that knowledge can only be sustained, transformed, and remain dynamic in its proper cultural context. Newly published in the International Federation of Library Associations' Indigenous Notions of Ownership and Libraries, Archives and Museums, “Sharing and Preserving Indigenous Knowledge of the Arctic Using Information and Communications Technology” discusses the way elders transfer Indigenous Knowledge to youth and many others in this modern age. The authors (Heidi McCann, Peter Pulsifer & Carolina Behe) draw on their collective experience to discuss the dialogue and approaches that have emerged when using information and communications technologies (ICT) to represent indigenous knowledge (IK) of the Arctic through the Exchange for Local Observations and Knowledge of the Arctic (ELOKA). This includes the establishments of protocols and methods that use digital technologies to share and preserve documented forms of IK while attempting to maintain cultural significance, context, ownership, and control of the resources. They pay particular attention to indigenous cultural expression in the context of academic research projects involving researchers and institutions from outside of the community.   Readers will begin to understand how to respect and preserve these ways of knowing while appreciating the cultural memory institutions’ attempts to transfer the knowledges to the next generation. 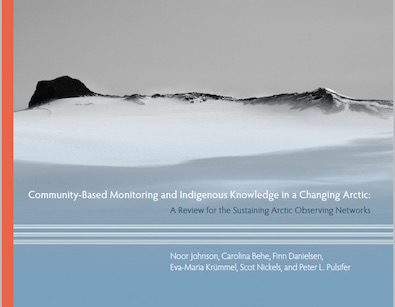 Inuit Circumpolar Council releases community-based monitoring report
The Inuit Circumpolar Council Canada released "Community-based monitoring and Indigenous Knowledge in a Changing Arctic - A Review for SAON." You can download a copy here. This review was produced with support from Brown University’s Voss Interdisciplinary Postdoctoral Fellowship, the Nordic Council of Ministers, the European Commission, and the National Science Foundation under grant numbers ARC 0856634 and ARC 1231638. Any opinions, findings, and conclusions or recommendations expressed in this review are those of the authors and do not necessarily reflect the views of these funders. The review contributes to the Sustaining Arctic Observing Network’s Task #9: “An International Review of Community-Based Monitoring in the Context of the Sustaining Arctic Observing Networks Process,” undertaken through a collaboration between the Inuit Circumpolar Council (ICC), the Institute at Brown for Environment and Society (IBES), the Exchange for Local Knowledge and Observations of the Arctic (ELOKA), and Inuit Qaujisarvingat: Inuit Knowledge Centre of Inuit Tapiriit Kanatami (ITK).

The authors express their deep appreciation for the contribution of a number of expert reviewers:

This document was written in collaboration with the Inuit Circumpolar Council, Brown University, the Exchange for Local Knowledge and Observations of the Arctic, and Inuit Qaujisarvingat: Inuit Knowledge Centre of Inuit Tapiriit Kanatami. It was designed at the National Snow and Ice Data Center in Boulder, Colorado, as part of the Cooperative Institute of Research in Environmental Sciences, and with the assistance and guidance of the Exchange for Local Observations and Knowledge of the Arctic (ELOKA) project.

ELOKA Advisory Committee workshop
In September 2013 the ELOKA Advisory Committee (EAC) convened its' first meeting during what was considered to be a 100 years flood phenomenon in Boulder, CO. Two years later and again in Boulder the EAC convened its final meeting in the form of a workshop. Known as the Sharing Knowledgeworkshop, ELOKA invited community members and collaborators from Finland, Nunavut and Alaska to Boulder for a fully packed three-day event in which participants presented their current projects inclusive of information and communication technologies that are currently being utilized for information sharing and preservation. This time around the Colorado weather cooperated with temperatures in the mid to high 80s during the week. Though it was a little warm for most of the participants, September 2015 has been recorded as the warmest September ever in Colorado. For more on the workshop see the EAC Meetings page.