The International Arctic Change was held in Ottawa, Ontario, Canada with the aim to stimulate discussions and foster collaborations among people with a vested interest in the Arctice and its people.  Participants included researchers, students, Northerners, policy makers, and stakeholders from all fields of Arctic research and all countries to address the numerous environmental, social, economical and political challenges and opportunities that are emerging from climate change and modernization in the Arctic.  Peter Pulsifer and Heidi McCann attended and presented in topical and poster sessions.  Also in attendance was EAC member, Carolina Behe who also presented in topical sessions.

ELOKA Advisory Committee Meeting convenes in Kyle, SD
The 2nd ELOKA Advisory Committee meeting convened on November 5-7, 2014 and was held in Kyle, SD at the Pejuta Haka College Center on the Pine Ridge Indian Reservation home to the Oglala Lakota.  In attendance were EAC members Carolina Behe and Lewis Brower, Peter Pulsifer and Heidi McCann of ELOKA, and Dennis Yellow Thunder and Mike Catches Enemy of the Oglala Lakota Tribal Historic Preservation Office.  Shari Fox (ELOKA Co-PI) and Scot Nickels (Director of Inuit Qaujisarvingat)  participated via Skype.  The meeting was a productive 2-day event in which occurred much dialogue about how best to move forward with ELOKA.  Our hosts were very gracious and polite and for a few of the attendees it was their first time visiting this beautiful place.  The weather cooperated, which allowed us to witness beautiful sun rises, mingle with the local horse herd as well as the local people and stand in awe of the landscapes Pine Ridge Indian Reservation has to offer.  A full report will be made available on the EAC meetings page.

The Association of Pacific Coast Geographers 2014 Conference
This year's conference will be held in Tucson, AZ at the Marriott University Park on September 24th through 27th, 2014. ELOKA is planning on attending and presenting a science poster on the Inuit Observations of Environmental Change data set.

The Indigenous Peoples Specialty Group (IPSG) of the Association of American Geographers (AAG) is sponsoring sessions at the 77th Association of Pacific Coast Geographers Annual Meeting.  While the IPSG are specifically looking to increase for graduate, undergraduate, tribal college and community college student participation, they welcome anyone doing research with/for/by Indigenous communities in the following areas

If you want more information about the conference, please visit the home page. 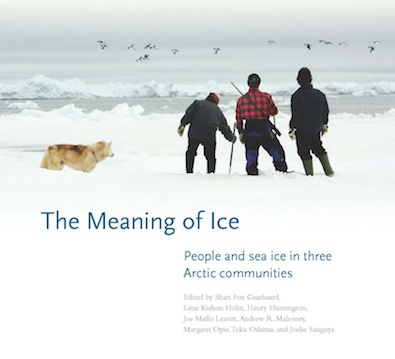 The Meaning of Ice: Sea Ice in Three Arctic Communities wins the 2014 William Mills Prize for Non-Fiction Polar Books
This year seventeen books met the qualifications to be nominated for the William Mills prize, the most ever since its inception. In addition to the prize winner, two books were awarded Honorary Mentions: The Japanese South Polar Expedition 1910-12: a Record of Antarctica Yupik Transitions: Change and Survival at Bering Strait, 1900-1960 Five other nominations were shortlisted: Race to the Top of the World: Richard Byrd and the First Flight to the North Pole The Reindeer Botanist: Alf Erling Porsild, 1901-1977 A Russian American Photographer in Tlingit Country Narwhals: Arctic Whales in a Melting World Antarctica: Global Science from a Frozen Continent The prize winner was announced at an awards ceremony on July 3, 2014 in Cambridge, UK, at the Polar Library Colloquy's biannual conference. The book prize honors the best Arctic or Antarctic non-fiction book published throughout the world. The prize includes a $300 US award and was first awarded in 2006.  Contributing editors are:  Shari  Fox, Lene Kielsen Holm, Henry Huntington, Joe Mello Leavitt, Andrew R. Mahoney, Margaret Opie, Toku Oshima and Joelie Sanguya. Published by the International Polar Institute Press, 2013.

"The Meaning of Ice celebrates Arctic sea ice as it is seen and experienced by the Inuit of Canada, the Iñupiat of Alaska, and the Inughuit of Greenland, who for generations have lived with it and thrived on what it offers. Over forty Inuit, Iñupiat, and Inughuit from three different Arctic communities contributed stories, original artwork, hand-drawn illustrations, maps, family photos, and even recipes to this book. Professional and historical photographs, children’s artwork, and innovative graphics add more to the story. The Meaning of Ice is an important contribution to understanding the Arctic and its people at a time when the region is undergoing profound change, not least in terms of sea ice. It takes readers beyond what sea ice is, to broaden our appreciation of what sea ice means."

CIRES on Ice Event
On June 5, 2014 in the Norlin Library join us for an hour with Shari Fox as she presents - Spirits of Snow and Ice: Lessons from Inuit Oral History for Understanding Human-Environment relationships in the Changing Arctic.  Dr. Fox, a geographer, CU researcher and long time Arctic resident will discuss Inuit culture, language and ways of knowing when it comes to snow and ice.  Please join us in Norlin CBIS, M549 from 3-4PM.

CIRES Rendezevous 2014
May 2, 2014 the ninth institute-wide CIRES Rendezvous will be held in the Glen Miller Ballroom on the CU Boulder campus. The CIRES Members' Council plans this half-day event with posters and presentations to familiarize CIRES employees with the depth, breadth, and quality of the pacesetting science being done by their fellow colleagues. The CIRES Rendezvous encourages collaborations that might result in new interdisciplinary research, and facilitate connections among our many innovative scientists, science support staff, and administrative staff. ELOKA will be presenting the poster - An Infrastructure for the Collection, Preservation and Sharing of Local and Traditional Knowledge - for the event.

New Canadian Polar Commission Report Focus on Knowledge Priorities of Northerners
The Canadian Polar Commission's wide-ranging new report on the state of northern knowledge in Canada analyzes the significant gains made since the beginning of International Polar Year 2007 with a view to determining today’s high-level research opportunities. Focussing on the perspectives of northerners, it highlights new knowledge that can be used to address many of the issues northerners have identified as important. Click here to download the report.

Community-Base Monitoring: Observing Alaska's Coast and Oceans workshop
In early April, ELOKA Team Member Heidi McCann attended the Arctic Ocean Observing System (AOOS) and Alaska Sea Grant sponsored Community-Based Monitoring: Observing Alaska's Coasts and Oceans workshop, where she presented ELOKA to a diverse audience of knowledge holders, community members and researchers. Held in Anchorage, AK, April 1-2, 2014 at the Hotel Captain Cook this two-day workshop explored community-based monitoring in Alaska and was the gathering place and launching pad to identify and respond to common issues for CBM in Alaska. Participants heard from model programs, clarified top priorities for funders and community members, developed a set of guidance documents—including Best Practices and Lessons Learned—and networked with others across the state that are interested in or are actively doing this work.

ELOKA Advisory Committee convenes it's first meeting
The first ever ELOKA Advisory Committee (EAC) meeting convened its' first meeting in Boulder, CO at the University of Colorado at Boulder campus. Made up of community knowledge holders, researchers, and other people active in the community-based research or data management domain the EAC will advise the ELOKA management team. The committee is not limited to Arctic residents/researchers. Members not affiliated with Arctic research or the Arctic will be encouraged to serve and offer their unique knowledge and skills, which will complement the other members in order to more effectively direct the ELOKA Project.

Second Plenary of the Research Data Alliance
Julia Collins and NSIDC Software Developer Joe Oldenburg attend the Research Data Alliance (RDA) Second biannual Plenary meeting "Building Global Partnership" held in Washington, DC where they presented the ELOKA poster "An infrastructure for the collection, preservation and sharing of Local and Traditional Knowledge". Data sharing offers important benefits for scientific progress and advancement of knowledge. However, several limitations and barriers in the general adoption of data sharing are still in place. Probably the most important challenge is that data sharing is not yet very common among scholars and is not yet seen as a regular activity among scientists, although important efforts are being invested in promoting data sharing.

ELOKA heads to New Mexico
ELOKA Team Members Allaina Wallace and Heidi McCann attended the International Conference of Indigenous, Archives, libraries, and Museums where they presented the poster "Adaptive methods: presenting and preserving local and traditional knowledge of the Arctic". Over 500 participants took part in this annual conference that offered many pre-conference workshops, tours and sessions that ensure cultural resources are protected and that Indigenous philosophies and values are reflected in an appropriate and authentic manner.

"When the Weather is Uggianaqtuq" has successful results at the Open Planets Foundation (OPF) Hackathon
ELOKA Team member Heidi McCann attended the Open Planets Foundation (OPF) Hackathon: "Tackling real-world collection challenges with digital forensics tools and methods." Held in Chapel Hill, NC, she brought the "When the Weather is Uggianaqtuq" or 'Uggi' CD ROM where she left with successful results for rescuing, preserving and restoring the data. In it's current software format 'Uggi' is becoming or will soon be obsolete. The results brought back from this event provide ELOKA the opportunity to honor the original intent (...use of media technology to help communicate Inuit observations and concerns about recent environmental change to students, researchers and decision-makers in Nunavut and beyond) of "Uggi" and to learn about what digital forensics has to offer to the digital preservation community in capturing, understanding and preserving digital collections.

Local Observations from the Seasonal Ice Zone Observing Network (SIZONet) Product Released
ELOKA is pleased to announce the release of the Local Observations from the Seasonal Ice Zone Observing Network data set. This data set contains observations of sea ice, weather, and wildlife collected by Indigenous Inupiaq and Yup'ik sea ice experts in several communities along the northern and western coasts of Alaska, beginning in 2006. The product is a database of local observations spatially referenced as near or around Alaskan villages and is available via a Web interface. To view the observations in the database, visitors must agree to the Use Agreement and enter as a Guest. Members of the participating Alaskan communities can log in as a Registered User for more robust use of the interface.